You are more than that. You are the Ghost.
This page needs to be expanded in order to include more relevant information.

Samurai, you are a warrior. I can see that. You trained your whole life for this. And you have won battles that lesser men have called unwinnable, yes? But while you were sharpening your sword, do you know how I prepared for Today? I learned. I know your language... your traditions... your beliefs... which villages to tame and... which to burn. So I ask you once again, samurai, do you surrender?
― Khotun Khan

Khotun Khan is the main antagonist of Ghost of Tsushima. He is a cunning and ruthless leader of the Mongol Empire.

He is voiced by Patrick Gallagher (English) / Tsutomu Isobe (Japanese).

Khotun Khan is a cousin of Kublai Khan and grandson of Genghis Khan. He invaded the island of Tsushima with his Mongol army During a standoff with the Samurai on the beach, Khotun kills Harunobu Adachi, the husband of Lady Masako Adachi, by lighting him on fire and beheading him, an act that knowingly insults the samurai code of bushido. Khotun captures Lord Shimura, and brings him to Castle Kaneda, where Jin attempts to save his uncle. On the bridge leading into Castle Kaneda, Khotun's face is cut by Jin, which causes Khotun to throw Jin from the bridge to the waters below.

The Khan keeps Lord Shimura within Castle Kaneda as a prisoner and attempts to break his will. Meanwhile, the Khan's forces advance across the isle, pillaging and destroying many settlements, temples, and garrisons and setting up camps and strongholds along the way.

After Jin defeats Ryuzo and rescues Lord Shimura, Khotun Khan forces Ryuzo to atone for his failure and prove his loyalty by burning a captive peasant alive outside Shimura Castle, coercing them into opening the gates and surrendering to the Mongols. Later, Ryuzo manages to capture Jin and Taka, and Khotun arrives not long afterwards to meet with Jin once again. He offers Jin amnesty if he surrenders and convinces his people to join the Mongols, but Jin refuses. Angered, Khotun unties Taka and hands him a katana, ordering him to kill Jin in exchange for his freedom. Taka attempts to attack Khotun, but Khotun easily subdues the blacksmith and beheads him to the horror of Jin. Jin manages to escape, swearing vengeance on the Khan and his allies.

Later on, Jin and Lord Shimura retake Castle Shimura from the Khan, killing Ryuzo in the process. However, Khotun finds out that the poison of Wolfsbane flowers were used by Jin to massacre his soldiers, and orders his men to gather massive amounts of the deadly flower. The Khan uses the poison to devastate the Kamiagata region, and retreats to his base of operations in Izumi Harbor. Jin and Yuna track the Khan, later launching a massive attack with the assistance of Lord Shimura and the forces of the Shogun. Jin confronts the Khan on a frozen lake, and the two duel for the second time. Jin gains the upper hand, prompting the Khan to flee to his main ship and call for the assistance of his soldiers. Despite the help of his reinforcements, the Khan is defeated by Jin. Jin impales the Khan with his sword, then decapitates the Khan, ending his campaign of terror and avenging the people of Tsushima.

The death of Khotun Khan cripples the Mongol invasion, sparing mainland Japan from the Mongol forces, and causing the bulk of the Khan's army to retreat back across the sea. Despite the Khan's death, many of his forces remained on Tsushima, continuing their fight against Jin and his allies.

Khotun Khan is shown to be greatly feared by his enemies, and highly respected by his army. His authority amongst his men is unquestioned, and they are willing to resort to any tactics to defeat the Khan's enemies. His ruthlessness and lack of honor is shown when he uses a wine glass and a torch to incinerate Lord Adachi after the latter challenges him to a duel. He is also more than willing to use brutal force against non-combatants, including unarmed monks.

Despite his cruelty, the Khan has a capacity for mercy, if it suits his goals. He is willing to offer amnesty to those who surrender and fight for him. Typically, he takes advantage of those in a desperate situation, such as when Ryuzo and his men were starving and felt disillusioned in their fight. He uses this "divide and conquer" strategy in order to turn his enemies against each other, making his conquests easier. In his own words, he knows "which villages to tame, and which villages to burn."

In order to aid in his subjugation of Japan, the Khan has learned how to speak Japanese, and has extensive knowledge of Japanese culture. This knowledge allows him the ability to use the Samurai's code of honor against them, as he leads them into traps and causes Lord Shimura to doubt the honor of his nephew Jin.

The Khan is a skilled warrior, utilizing a massive Guandao-like weapon in the instances he is seen in combat. In his first encounter with Jin, the Khan easily overwhelms his opponent. He is highly confident in his own skills, showing no fear when confronting Jin for the final time despite the latter's decimation of his army. However, once Jin gains the upper hand in combat against him, the Khan panics, fleeing for his command ship and calling reinforcements to aid him. In addition, when Jin wounds his face during their first encounter, the Khan loses his composure and flies into a rage, throttling Jin and hurling him off the bridge they were dueling on. 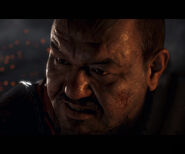 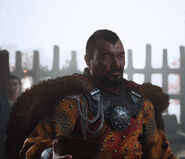 Khotun Khan in battle.
Add a photo to this gallery

Retrieved from "https://ghostoftsushima.fandom.com/wiki/Khotun_Khan?oldid=6458"
Community content is available under CC-BY-SA unless otherwise noted.