When we fight, we face our enemy head-on. And when we take their life, we look them in the eye. With courage and respect. This is what makes us samurai. Only cowards strike from the shadows.
― Lord Shimura to Jin Sakai in The Warrior's Code

Samurai are the military force present on the island of Tsushima and the Japanese mainland. The Samurai clans within the game include Oga, Adachi, Shimura, Yarikawa, Nagao, Sakai and Kikuchi. Amongst the 80 samurai originally stationed on Tsushima Island, 78 samurai were slain at the Battle of Komoda Beach, leaving only few survivors, including Jin Sakai and Lord Shimura, alongside Sadanobu Ishikawa who was ambushed by his former student on the way to the battle and Masako Adachi, who stayed behind at the Adachi Estate to protect the women and children of Clan Adachi.

After Jin Sakai and Lord Shimura successfully send for reinforcements from the Shogun in order to combat the Mongol Invasion, the number of samurai occupying Tsushima drastically increased, including new members from Clan Oga led by Sadamune Oga. These reinforcements were instrumental in defeating the Mongol invasion during the final confrontation at Port Izumi, where Lord Shimura led the main force of Samurai warriors to help The Ghost defeat Khotun Khan.

The Samurai start off as allies to Jin Sakai, helping in the Battle of Komoda Beach and can be seen attacking Mongol Camps after Jin has engaged them first, however after the Siege of Castle Shimura, once Jin has branded a tratior to the Shogun, the samurai become hostile once notified of his presence. This is seen when Jin was required to sneak through Castle Shimura undetected in order to avoid conflict with the Samurai, as well as being forced to kill the samurai guarding Lady Hana. However, amongst Jin's allies gathered at Jogaku Temple include Samurai who believe in the Ghost and defected from the Shogun, as well as retainers from Clan Yarikawa.

The Samurai are held in high regard by the people of Tsushima, who are seen bowing in the presence of Jin, as well as calling him by the title of Lord. However, this is not the case for all areas of Japan, such as on Iki Island where the vast majority of inhabitants despise the very thought of the samurai due to the Invasion led by Kazumasa Sakai, who was dubbed the Butcher due to his merciless slaughter of raiders and innocent civilians alike. This forced Jin Sakai to hide his true identity as a samurai by donning the Jin from Yarikawa armor dye whenever the Sakai Clan Armor was equipped, until he proved his loyalty to Fune and the rest of the raiders.

Jin retains his respect for the samurai after being stripped of the title of Samurai, which is demonstrated when he refuses to kill anyone during his infiltration of Castle Shimura; this is repaid by the Samurai in turn when they arrive to distract the Mongol Forces at Port Izumi, allowing Jin to sneak into the main keep to confront the Khan.

The Samurai are highly skilled in swordsmanship, being trained vigorously from a very young age to master both their emotions and their blade. When engaged in combat, they exhibit similar skills to the Ronin, performing quick 3 strike combos followed by an unblock able strike than can only be parried or dodged. The samurai also exhibit skill in kenjutsu, performing unstoppable strikes after drawing their sword.

The Samurai can be split into 2 factions; grunts who have lower health and stagger meters than their elite counterparts, who are distinguished by their larger amount of armor and helmets. Amongst the most skilled samurai include Yasuhira Koga, The Spirit of Yarikawa's Vengeance, Lady Masako and Bettomaru, who can only be defeated in Duels.

In Ghost of Tsushima, Jin can use combat tactics based on his samurai training, as well as using the so-called "disgraceful" techniques of the Ghost. Jin grew up on Tsushima and was trained as a samurai since a very young age, and as such he sees it is his duty to protect Tsushima and its people. As a samurai, he has the respect of the people around him, who will bow as he passes by.

Utilize the power of the Guiding Wind. 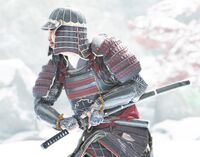 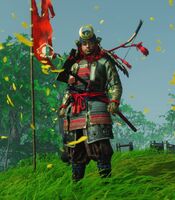